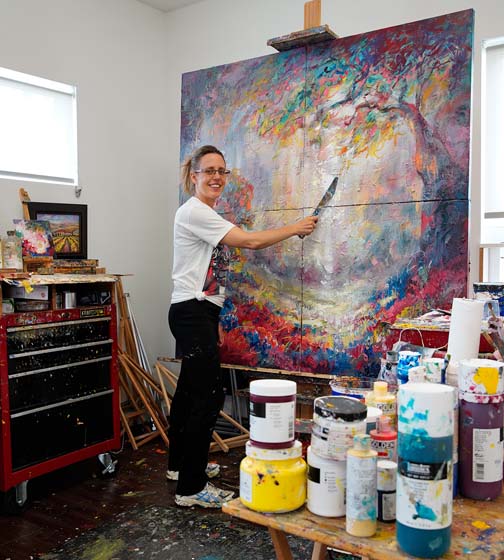 Click here to take a guided walk through her studio with Niki as she explains her painting process.

Niki Gulley’s passion for painting began in grade school when she had to draw something as mundane as shoes for art class, and loved every minute of it. Seeing a spark of enthusiasm, her parents signed her up for private art lessons and she has been hooked ever since. Following her childhood in Glenview, Illinois, Niki relocated to Dallas to pursue an art major at Southern Methodist University. Since she disliked the long Chicago winters, Dallas seemed like the place to stay after completing her degree.

Upon graduating Gulley entered the world of advertising, working as art director for a Dallas magazine. After a few years passed by, Niki felt like something was missing. So she started painting again during nights, weekends and any time she could find a free moment. This satisfied the void and she began to feel fulfilled again. Ten years later she segued from advertising to live her life’s dream of being a full-time artist and has continued to paint full time for the past fifteen years. Besides painting in her Dallas studio, Gulley has traveled the globe in search for inspiration, and often paints sketches on location to create larger works back home. With her husband and photographer, Scott Williams, they have combined their mutual experience as travelers, coupled with their passion for teaching, to conduct painting and photography Art Treks both in Europe and the US.

It’s from this search for inspiration that Niki translates onto canvas her emotion for the viewer to share. She seeks to capture the beauty and mysteries of our landscape, utilizing vivid color palettes to convey a particular mood. Gulley invites you to reconnect with nature and escape the day-to-day responsibilities along with her in these creations.

Niki Gulley’s artwork not only has a loyal local following, but is also recognized throughout the country. She has participated in juried exhibitions at the Dallas Museum of Art and various museums around Texas, in addition to being represented by galleries from coast to coast, including New York City, Palm Beach, Vail and San Diego. Besides exhibiting in competitive international shows, her award-winning paintings have also been collected by several corporations including Presbyterian Hospital in New York City, Baylor Medical Center in Dallas and Northstar Bank of Texas. Additionally, Gulley is a member of the prestigious Pastel Society of America and Oil Painters of America Society.

You can see more of Gulley’s work at Marigold Arts on Canyon Road in Santa Fe, NM, AO5 Gallery in Austin, TX, the Good Art Company Gallery in Fredericksburg, TX, The Statton Gallery in Eureka Springs, AR, Studio Seven Arts in Pleasonton, CA, Sandz Fine Art Gallery in Pismo Beach, CA or at Brandon Jacobs Gallery in Kansas City, MO. Her studio in Dallas, TX is also open by appointment if you would like Gulley to give you a tour.

• Plein-air painting workshop instructor at the Dallas Museum of Art in conjunction with “Van Gogh and the Olive Groves,” Nov. 2021

• Published in 76092 Magazine as a featured artist for “Art in the Square.”

You can see a digital copy of the magazine here, 76092magazine.com/digital-edition/.

• Interviewed by the Saint Louis Art Fair, 2021. View the video at youtube.com/embed/1jhBUPny_GY.

To read the article, visit https://shoutoutdfw.com/meet-niki-gulley-contemporary-impressionist-artist/.

To read the article, visit https://shoutoutdfw.com/meet-niki-gulley-contemporary-impressionist-artist/

• Juried into the Discovery Show at Milan Gallery, Fort Worth, TX, 2016